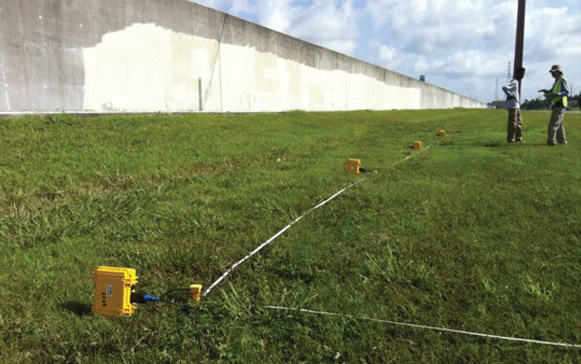 Inspection is an important part of mitigating the hazard to those communities living within the shadow of a levee. Recently, researchers from OYO, CSU East Bay, and Louisiana State University used the Atom, a wireless seismic system manufactured by Geometrics, as part of a simple, non-destructive method for levee inspection. The researchers acquired both active and passive seismic data which is used in identifying shallow subsurface conditions that cannot be evaluated using other non-destructive techniques.

Evaluating and monitoring levee conditions is vitally important, as the human and ﬁnancial costs associated with failed levees can be great. Following Hurricane Katrina, nearly 80 percent of the city of New Orleans ﬂooded and an estimated 1,400 people lost their lives. One of the contributing causes of the failure of the Industrial Canal was due to thick layers of sand in place of the recommended clay. For the 17th Street Canal, a major factor for its failing was the presence of a layer of water-saturated peat, approximately 9 meters below the surface, and between 1.5 to 6.1 meters thick.

In both of these cases, engineers over-estimated the shear strength of these materials, resulting in a low ﬁnal factor of safety. In this study, the researchers investigated three sites along levees in the New Orleans, Louisiana, USA, area: Industrial Canal, London Avenue Canal, and 17th Street Canal. These sites sustained damage from Hurricane Katrina in 2005 and have since been rebuilt.